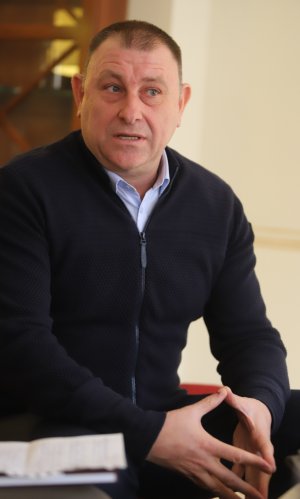 Stayko Staykov, Chairman of the Board of Directors of the Bulgarian Association of Agricultural Land Owners (BAALO): "Compensation paid for acquisition of agricultural land for roads construction is far below market prices"

“According to the state, the price of an acre in Dobrudja region is set to 100 BGN but it actually costs 2000 BGN”, says Stayko Staykov, chairman of BAALO.

-Mr. Staykov, is the reimbursement that the land owners receive in cases of state -forced land acquisition low? Yes, it is. The problem with the acquisition of land by the state is serious and it dates back long in the past. We have been pushing for changes for several years now and we hoped they would be included in the Law for agricultural lands, but unfortunately it has never been passed as such. The prices at which these reimbursement compensations are set date back to 20-30 years ago and are dependent on the category of the land being expropriated. This is extremely unjust for us because category range between seventh and tenth is low and thus the owner receives between 50BGN and 300BGN per acre. That is, to put it mildly, outrageous, because the owner cannot buy anything with this money. And at the same time the law says that the owner must be justly compensated.

-As far as I know, agricultural lands falling into the 7th category, are common in Dobrudja region as well, is that right?

-Yes, that is right, besides, the prices there go over 2000 BGN per acre and it is totally absurd for the owners to receive low compensation rates for expropriated land. In Silistra, the same trend is visible, land assigned to category 6 there, will cost around 600-700 BGN per acre. The experts who perform land evaluation are not to be blamed themselves because they work on the basis of concluded transactions per year. They simply follow the regulatory requirements, which we want to be changed. When offered to be compensated, it is normal to wish to buy the same amount of land. Not to mention that you have expenses on the purchase and the selling of the land.

At the same time we are witnessing another discrepancy-if you want to exchange land, the state will even charge you less, in Bulgaria it is exactly the opposite-not only will you get an insignificant amount, but you will also have to pay for all the documents necessary for the transfer. Yes, the construction of roads is a good thing but let's not do it at the expense of the owners. This is the main problem, although we are now talking only about Hemus Highway and the highway segments around where there are many terrains for expropriation.

Small land owners are more than three million and the State violates their constitutional rights. There are over 1 million acres of land within the State Agricultural Land Fund. Our idea for this land is not to be sold or auctioned and when the state needs to compensate the owners, they will have the option to choose between either a cash benefit or land plots to receive. It is very important for us and the state to take into account the harvest season and only to proceed to expropriation when appropriate because otherwise the owners will face losses.

The prices of fields and agricultural lands in general continue to rise every year but compensation benefits have not changed for dozens of years. Compensatory prices date back to the times when the acre in Dobrudja was sold for 100 BGN, while at the moment it costs 2000 BGN and the compensation for such property should not be tied to the category of the land.

-Do you have any such cases at BAALO?

-It's not just one case, there are numerous cases actually. Every day, we are contacted by affected people from different municipalities who complain about the low compensatory prices, be it when the state is buying their fields for building highways, be it for the establishment of rights of way. We try to appeal but the result is clear, under the current legal framework we can not get a higher price. And finally, any appeal procedure initiated is at our own expense. The situation with smaller owners is even more worrying because they either cannot afford to appeal at all, or they are not familiar with the law and procedures and therefore become extremely worried. If you refuse the state to compensate you and do not agree with the prices it offers you, there is a procedure in which the land is taken for the specific project within a certain period anyway. And if and when you’ll get your money is another question. This could happen in a year or two but you might not get it at all. For example, if you own a land abroad and you have no bank account in our country, how exactly will the money be transferred to you? They will be kept in an account here but we think this is wrong and we also believe the normative should be changed. Some kind of average price must be established and it should be based on current market prices. Bulgaria and Romania continue to have the lowest prices in Europe and the state will not be financially harmed. The Constitution says that Bulgaria is the rule of law state and private property is inviolable.

-Who have you spoken to regarding this matter?

We've sent letters to all ministries, including the Minister of Agriculture. The law has to be changed. Affected are not only the owners of land within the association, but in practice everyone including other branch organizations-milk producers, grain producers, etc. Even the experts who make the evaluation and determine the amount of benefits due are affected because they also own land.

-What is the current progress of the new law on agricultural land?

-A new working group in the Ministry is currently working on the proposals. The deadline for the publication of the project is by the end of the year and then an opportunity for public consultation will be given. Nothing has changed-Bulgaria still remains the country with the most fragmented land in the whole of Europe. What’s more, from all former irrigation facilities, only few have been preserved and they are in a bad condition. A year ago the Ministry proposed a project, which, to put it mildly, was disturbing. For example, it was envisaged for a fixed amount for the minimum payment to be set, which is absurd. How does poor quality land falling into the last categories, cost as much as high-quality land?

I hope the law will be clearer now and that it will be approved soon. The law is also of a huge importance to foreign investors who want to make sure that if they come to Bulgaria their investments will not be lost. So far, agricultural laws have been changed over 60 times. Usually only partial changes are made and often times they do not correspond to other sections and regulations of the law, which leaves people confused.

If you are working from year to year and apiece as at the moment and a company invests some money, after a few years, when the conditions change again, the company will lose its investment. Then why would anyone even consider investing? In order for an efficiently-working agricultural sector to be functioning, the law must be such as to protect both the interest of the State and that of the farmers and the landowners. So young people will not have to worry that when they return to Bulgaria and withdraw credit for their business, they will lose their money after a few years.

-The problem with the hail also needs to be addressed, is that right?

-Yes, it's one of the most serious problems together with irrigation. Currently, the state will compensate the farmer with a certain amount only if the farmer has 100% damage. And the insurance company pays very little-in most cases about 20-30%. Therefore, farmers prefer not to insure themselves. The idea of a tax in case of "hail" for us is controversial because the state can find another way to raise money from its farmers, for example, if the state solves this problem itself, farmers will have greater harvest and accordingly will pay higher taxes.

-The market in our country is stable because there is no real land consolidation and therefore we can hardly expect a big investor to come and disrupt the balance. We expect a price increase from 5% but that's not at all insignificant. Compared to average prices in Dobrudja, this is 100 BGN higher.

-How do you expect the land market to change in view of the new programming period?

-We expect the subsidy levels to be maintained at the same level. The farmers were stressed because they expected to have problems but their fears were not justified and even Bulgaria would get a bit of an increase in the subsidies assigned to the country. We should not intentionally put pressure on the agricultural sector because farmers are already worried about other issues, the agriculture is a factory under the sky and the worries about the harvest and the market prices are more than enough to be preoccupied about.

-Will Brexit affect agriculture in Bulgaria?

For us as a small country, Brexit shouldn't matter that much. Europe has deliberately put pressure on the small countries so that the amount of subsidies remains the same. There should have been a convergence of what we and our other colleagues in the EU are getting, but this didn’t happen. Now, since Brexit talks began, it is also constantly being discussed that the amount of subsidies should be kept at the same level because the EU has no funds to increase them. No profitable and competitive farming can be made without the support from own country’s government or from the EU.

Stayko Staykov is chairman of the Board of Directors of the Bulgarian Association of Agricultural Land Owners (BAALO). He was born in 1969 in Sliven. In 1996, he graduated from Aleko Konstantinov Institute for Tourism in Burgas. He also graduated Tourism at Burgas Free University and later received a degree in Finances from "St. Cyril and St. Methodius " university in Veliko Tarnovo. He has been the managing director of Staven JSC since 2010.